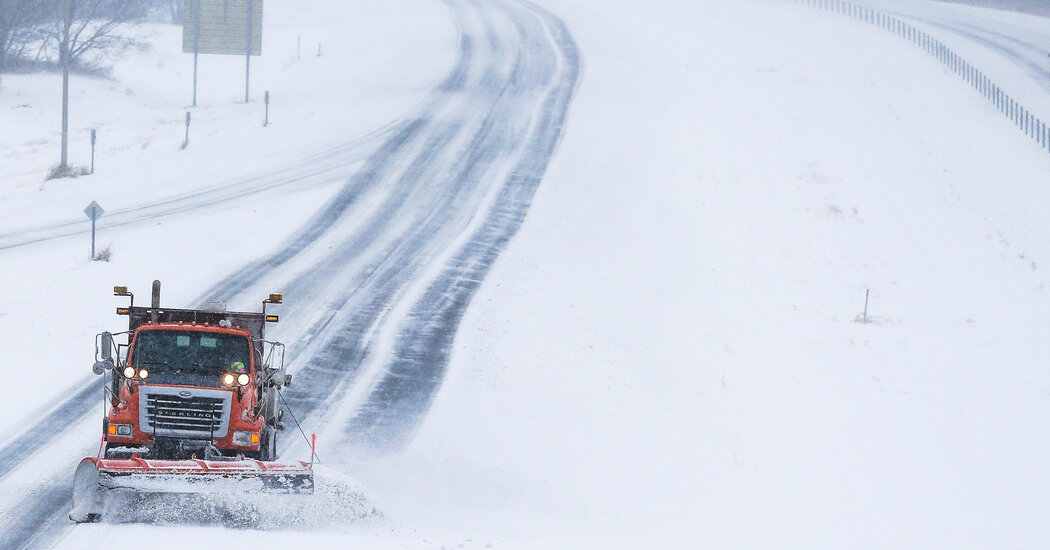 The suggestions came in by the thousands, with the inevitable puns and nods to Prince, Minnesota Twins legends and, of course, snow.

There was Raspberry Brrr-et, Road Carew and Minnesota nICE, all credible options as clever names for state snowplows.

When the Minnesota Department of Transportation recently asked for the public’s help with naming eight snowplows as part of a contest, an even more popular suggestion was the phrase “Abolish ICE,” according to an analysis by The Minnesota Reformer, an independent news website, which obtained the 24,000 entries in a public records request.

The wintry-sounding slogan, a play on the rallying cry of critics of the federal Immigration and Customs Enforcement agency, ranked No. 2 among the entries, The Reformer determined.

But Minnesota transportation officials drew a line in the snow, excluding it from a list of 50 finalists that are part of an online poll that ends on Friday. The winners will be used to name a plow in each of the state’s eight regional transportation districts.

“It was meant to be a fun and lighthearted contest,” Jake Loesch, a spokesman for the Minnesota Department of Transportation, said in an interview on Sunday night. “There’s certainly a time and place for political expression. A snowplow naming contest might not be the appropriate place for that.”

Mr. Loesch alluded to the fuss over the Abolish ICE name on Friday on Twitter.

“I love our @MnDOT snowplow naming contest a lot but also did not anticipate that in creating it, I was sentencing myself to a lifetime of apologizing that people’s fav submission wasn’t on the final 50,” Mr. Loesch said, adding that “being born in MN has prepared me for this very well #opesorry.”

Plowy McPlowFace and variations like Snowy McSnowface and Plowy McPlowerson were the most popular submissions, and Plowy McPlowFace made the list of 50 finalists. That appears to be a nod back to Boaty McBoatface, the name internet users in Britain overwhelmingly favored for a $287 million polar research ship in 2016. Britain’s Science Ministry ultimately disregarded the 124,000 votes and instead named the vessel for the naturalist David Attenborough.

Not all of the submissions were jokes. The list of 50 choices includes Giiwedin, the Ojibwe word for “North Wind,” and Ičamna, the Dakota word for “blizzard.”

The “Abolish ICE” name was suggested in a December tweet by Kanad Gupta, a software engineer from Minneapolis who is in his late 20s.

“I think it was a clever pun more than anything,” Mr. Gupta said in an interview on Sunday night, adding that he had made the suggestion in jest, though he does support eliminating ICE. “I’d love for them to reconsider, but I’m not losing sleep over it.”

Although President Biden has called for an overhaul of the immigration system, he has stopped short of seeking to dismantle ICE, as some on the political left have urged. In Mr. Biden’s first month in office, ICE pivoted away from some of the contentious policies of the hard-line “America First” agenda of former President Donald J. Trump.

This might make it seem as if Plowy McPlowface is a shoo-in, but not necessarily. Minnesota transportation officials will make the final decisions, Mr. Loesch said, which will not be solely based on popularity in the online poll.

Once the names are chosen, they will appear on the back or sides of the snowplows, with one assigned to each of the state’s eight regional transportation districts, officials said.

The state has more than 800 snowplows in its fleet, Mr. Loesch said.

He said the idea of naming snowplows was inspired by Scotland, which drew widespread attention in December with its names for its plows, known as gritters. The names there include William Wall-ice, License to Chill, Sled Zeppelin and Sweet Child O’Brine.

“We got a lot of questions from people about why Minnesota doesn’t name plows,” Mr. Loesch said.

The idea is gaining traction (sorry). Along with Minnesota, which announced its contest in December, South Dakota and Michigan are also seeking the public’s help in naming snowplows. So are the cities of Scandia, Minn., and Syracuse, N.Y.

In Minnesota, the names had to be no more than 50 characters. That left room for some long ones: Oh Snow You Didn’t, Edward Blizzardhands, Duck Duck Orange Truck and Princess Kay of the Snowy Way all made the list of finalists.

Mr. Loesch said the range of submissions was wild. “There was no way I could have come up with all of those myself,” he said.

Apartment ceiling crashes down on 12-yo

Despite palace fears, Meghan Markle has only ‘kind words’ for Kate Middleton in Oprah interview

Here’s How the Senate Pared Back Biden’s Stimulus Plan

US should consider ban on Boohoo clothing, says charity

The day we need now more than ever

Police Tackled And Pepper-Sprayed A Black Woman With Her 3-Year-Old Because...