Jessica Watkins, an Oath Keeper charged with conspiring to storm the US Capitol, has asked to be released from jail pending trial, alleging that she has been “treated harshly” and is at “particular risk in custody” because she is transgender. She also argues she is no threat to the public and only went to the Capitol because “she believed that the President of the United States was calling upon her.”

Watkins, 38, a former Army ranger who served in Afghanistan, was “forced out of the military after her sexual orientation was discovered,” her attorney wrote in a motion for home detention filed late Saturday. In the petition, Watkins alleged that while in a county jail in Ohio, she was stripped naked and left “in a cell with lights on 24 hours a day for 4 days in full view of everyone.” According to the attorney, that was a response to a hunger strike Watkins went on in a failed attempt to get medical attention for an injury to her arm.

Watkins has been held in at least two facilities since her arrest, including the Montgomery County Jail in Dayton, Ohio. A spokesperson for the county sheriff’s office, which administers the jail, said she could not provide immediate comment. It was not clear Saturday night where Watkins was currently being held.

Watkins, who operates a bar called the Jolly Roger in Woodstock, Ohio, turned herself in and was arrested on Jan. 17. She is facing some of the most serious charges to come out of the Jan 6 insurrection.

A grand jury has indicted her and eight others associated with the extremist group the Oath Keepers with descending upon the Capitol in “an organized and practiced fashion” to stop Congress from certifying Joe Biden’s election as president.

Watkins wore full tactical gear as she joined a line of Oath Keepers who pushed through the mob outside the Capitol, up the stairs, and finally inside the building. Prosecutors have obtained messages and videos in which she appeared to exult in what happened that day.

“Yeah. We stormed the Capitol today,” she wrote in one message posted to the social app Parler. “Teargassed, the whole 9. Pushed our way into the Rotunda. Made it into the Senate even. The news is lying (even Fox) about the Historical Events we created today.”

Prosecutors have alleged that Watkins was part of an organized group of Oath Keepers and charge that they conspired to disrupt the peaceful transfer of power.

Court filings indicate that as early as Nov. 9 — less than a week after the election — Watkins was sending text messages inviting people to her group’s basic training in Ohio, telling one person, “l need you fighting fit by innaugeration [sic].”

But Watkins’ attorney, federal public defender Michelle Peterson, argues that she poses no threat and should be allowed to return home with a GPS monitoring device pending trial.

According to Peterson, Watkins has no history of violence, no prior convictions, and that while she acknowledges entering the Capitol she “did not vandalize anything … or engage in any destruction of property, and in fact, encouraged others not to vandalize.”

The public defender also noted that while in the Capitol, Watkins spoke with police officers, followed their orders, and “participated in medical rescue operations for injured people during the event.” Watkins is a former firefighter and EMT, working for a local fire department in Fayetteville, NC, for several years.

The filing notes that when Watkins learned she was wanted for questioning, she “drove nearly eight hours to turn herself in to local police.”

When she did so, according to court papers, authorities were not even aware that she was wanted because her arrest warrant had not yet been entered into the national system.

In a filing last week arguing she should remain behind bars, prosecutors argued that Watkins, who in 2019 founded the Ohio State Regular Militia and is a dues-paying member of the Oath Keepers, “was thus not an ancillary player who became swept up in the moment, but a key figure who put into motion the violence that overwhelmed the Capitol.”

Watkins, they added, “formed a subset of the most extreme insurgents that plotted then tried to execute a sophisticated plan to forcibly stop the results of a Presidential Election from taking effect.”

Watkins, for her part, argued that she was induced to go to the Capitol by Trump. “Although misguided,” her attorney wrote, “she believed she was supporting the Constitution and her government by providing security services at the rally organized by Mr. Trump and the Republican lawmakers who supported his goals.”

Last week, a federal judge denied a request for release by Thomas Caldwell, a Virginia man accused of coordinating the Capitol raid with Watkins, and indicted along with her and the others. Caldwell “represents not just a danger to the community but to the fabric of democracy,” Judge Amit Mehta said. 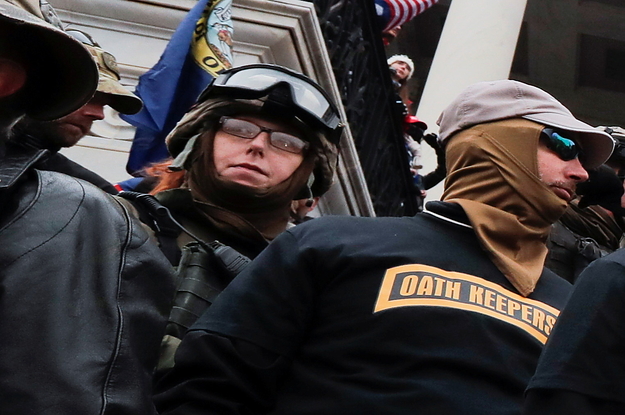 Abuse survivor Carmen Tarleton thanks donor’s family for face transplantCarmen Tarleton’s life was changed forever in 2007 when her ex-husband attacked her. Picture: Carmen...

‘Heroic 0 not out’ saves insane thrillerNo one expected Liam O’Connor (right) to be the hero with the bat.

‘So much blood’: Stabbing outside Melbourne cafeThe fire brigade clean up at the scene of the stabbing. Picture: Ian Currie

Live like Rajasthani royalty at this 475-year-old palace hotel

People Are Revealing The Tips, Tricks, And Habits They Turn To When They’re Feeling...