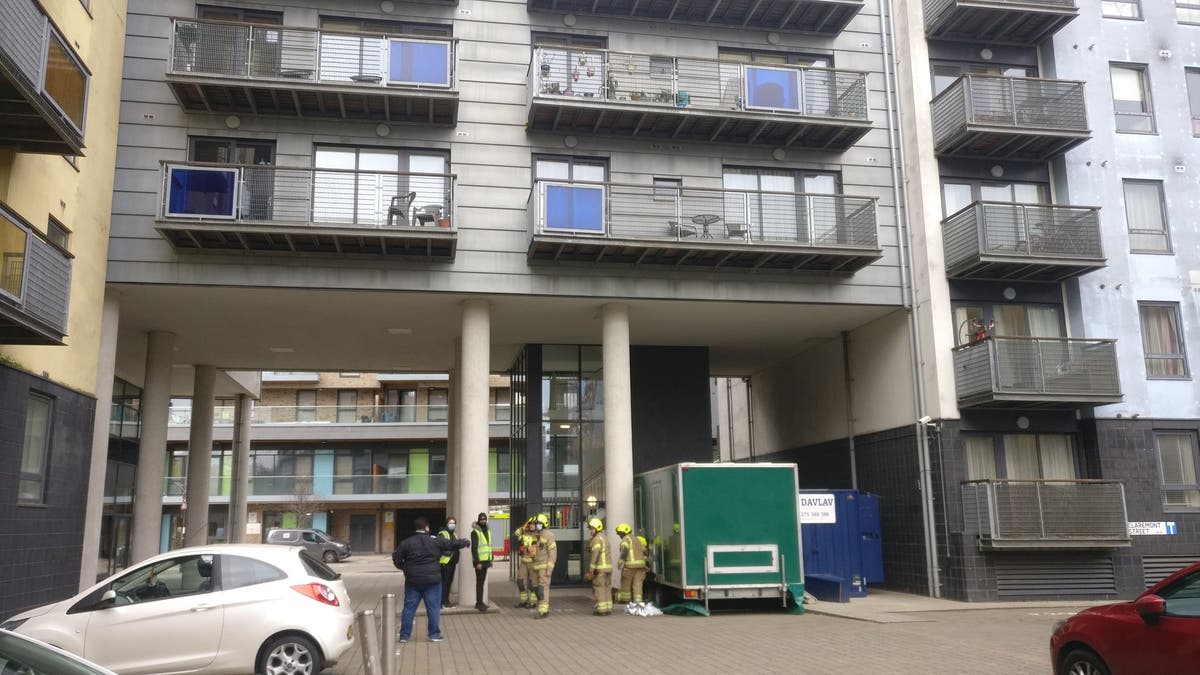 Residents of a London apartment block covered in flammable cladding were shocked on Friday when fire crews turned up to extinguish a blaze in the cabin of guards hired to protect the development.

Firefighters were called after a witness reported smoke coming from a temporary building used by the “waking watch” patrol at New Haddo development in Greenwich. The area was quickly declared safe but one resident said that the arrival of fire engines was “highly concerning”.

Fire risk and safety expert Steve Mackenzie said a fire in the cabin could have caused a serious incident.

“The cabin was parked directly under combustible balconies & potentially combustible EPS [expanded polystyrene] render which was banned in Australia from the beginning of this month.”

In December, a fire in a flat at New Haddo was missed by the waking watch patrol who were not alerted until several minutes after firefighters arrived on the scene, residents reported.

Mr Mackenzie said the incidents again raised questions about the effectiveness of waking watch patrols which fire chiefs have mandated at hundreds of blocks of flats found to have a host of safety defects since the Grenfell Tower tragedy.

Security guards are supposed to keep residents safe, alerting them to signs of fire with air horns. But a growing number of leaseholders have complained of poor service and bills of hundreds of pounds a month.

One homeowner in the New Haddo described the service as “completely pointless, prohibitively expensive and of no proven benefit”.

Mr Mackenzie labelled the provision of waking watch an “unregulated free-for-all” and said he heard of issues with the patrols across the UK almost daily.

“There is no hard empirical research that waking watch fully compensates for the cladding issues and the absence of communal fire alarms.”

He described the patrols – which have been ongoing for more than a year in some cases – as a “last resort” to prevent fire services ordering unsafe buildings to be evacuated. Fire alarms would be more effective and significantly cheaper, he said.

Antonia Bonello, a shared owner of a flat in New Haddo, said it was a “joke” that residents were paying for a service that may have increased the risk of fire. Residents reported bills of between £200 and £300 a month.

Contractors have recently been on site to install an fire alarms which it is hoped will mean patrols are no longer needed, residents said.

However, leaseholders in other developments have spent six-figure sums on alarms and heat-sensor systems, only to be told that further fire risks have been found and waking watch must return.

Residents of Albion Works in Manchester had guards on duty 24 hours a day from October 2019 to July last year when alarms were installed. They then had to reinstate the waking watch after further surveys found flammable render on the walls.

The expanded polystyrene (EPS) material has been known for years to pose a significant fire risk yet it is widely used as a cheap way of insulating buildings. The UK government has refused to conduct further tests on the material.

Albion Works resident Matthew Hallsworth said the reinstatement of fire patrols had added to a feeling of uncertainty about when his cladding ordeal would end.

“After fitting the alarm system we’d have been happy to pay as quickly as possible to get it sorted and get that immediate safety,” he said.

Mr Hallsworth’s service charges have doubled, and building insurance premiums have gone up 300 per cent. He said he and his partner had been forced to postpone plans to buy a larger home and start a family.

“The mental health impact, the anxiety, has been huge. I’ve never experienced anything like it before,” he said.

A spokesperson for the building’s management company, RGM, said engineers had deemed the fire alarm to be sufficient when it was installed.

However, “further investigation by architects during the redesign of the external wall system discovered other concerns”.

The company added: “The fire engineers believed these issues required another extension of the alarm system and this recommendation was supported by Greater Manchester Fire Service.”

Recent changes to guidance from the National Fire Chiefs Council (NFCC) may have created confusion in some instances around the need for waking watch, said Matt Hodges-Long, co-founder of the Building Safety Register.

The NFCC now states that while some buildings may not need waking watch patrols after installing alarms, they may still need “evacuation management” staff. For smaller buildings this may mean the number of guards remains the same.

Mr Hodges-Long said there he hadn’t seen any evidence for or against the effectiveness of waking watch but anecdotally he had heard far more negative than positive accounts.

“If somebody was to say ‘you need a fire guard and, by the way, it’s a chocolate one and it’s going to cost you a lot of money’ I wouldn’t want it,” he said.

“But if you can show me it is going to keep my family safe I might think, OK I’ll take it because that’s the difference between staying alive or not staying alive.

“If I’ve seen no evidence that it’s effective and then I have a fire in my block where it proves to be completely useless, I’d be jumping up and down about it.”

Rishi Sunak hints at tax rises in Budget next week

Trump at CPAC – live: Ex-president to give first speech after leaving office as rumours swirl around 2024 bid

Pictured: Teenager stabbed to death yards from where his cousin was killed in Edgware Road

I’ve created a post-lockdown bucket list – but are my ambitions too limited?

What is the Budget and why does it matter?

Who is Erica Herman? All about Tiger Woods’ girlfriend