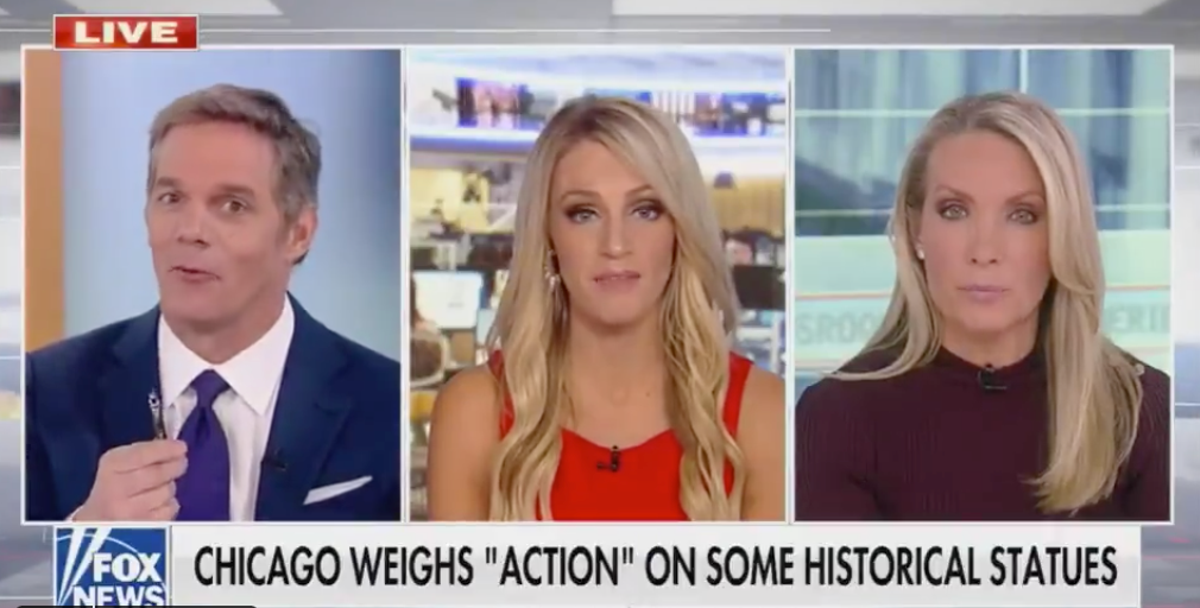 A Fox News host has warned that Bible characters could soon become the next targets of cancel culture – a statement people have since mocked online.

“I tell you, if they start canceling these American presidents, they’re going to come after Bible characters next,” Bill Hemmer said during a Fox News segment about “cancel culture”

The statement came in response to a Chicago committee reviewing the names of more than 500 statues, sculptures, and other public historical landmarks to see if any should be renamed. Included in the review was five statues of President Abraham Lincoln.

“The Chicago Monuments Project intends to grapple with the often unacknowledged – or forgotten – history associated with the City’s various municipal art collections and provides a vehicle to address the hard truths of Chicago’s racial history, confront the ways in which that history has and has not been memorialised and develop a framework for marking public space that elevates new ways to memorialize Chicago’s true and complete history,” Chicago’s Department of Cultural Affairs and Special Events said in a statement about the committee.

In the last year, statues of specific presidents and Confederate leaders have come under fire across the country amid conversations of racial injustice.

Mr Hemmer claimed the Chicago committee proved “Bible characters” could be the next to go in American culture, which was then mocked on social media.

“Moses desperately scrolling through his tablets to delete the problematic Commandments,” the Daily Show tweeted in response to the claim.

“How about the Devil? Can we cancel the Devil?” An NBC Boston reporter said in response to the Friday segment.

Other people were quick to point out that Mr Hemmer called Bible figures “characters”, which alludes to them being fictionalised instead of real beings that existed in history.

“The use of the word ‘character’ is telling here. Believers don’t call Bible figures ‘characters’. It’s all a game for these clowns,” another person wrote.

During the Fox News segment, the hosts claimed that all 41 statues under review could be at risk for removal, including the ones of Abraham Lincoln.

“And you know, over the summer, statues were ripped down,” said Fox News reporter Carley Shimkus. “It was violent. It was wrong. It was illegal.”

“I think equally troubling would be to have a group of professional people go through this months long process, look at the history of these men and what they represent to our country, and still decide to take these statues down,” she continued.

Chicago officials said that not all statues and monuments, if any, under review will be changed, according to the Chicago Tribune.

“This project is a powerful opportunity for us to come together as a city to assess the many monuments and memorials across our neighborhoods and communities – to face our history and what and how we memorialize that history,” Chicago Mayor Lori Lightfoot said in a statement. “Given the past year and in particular the past summer that made clear history isn’t past, it is essential that residents are a part of this conversation.”

‘I collided with the establishment’: Inside the Wallis and Edward TV interview that rocked the monarchy five decades before Meghan and Harry

Hundreds of British girls ‘married off as children each year’

NOT REAL NEWS: A look at what didn’t happen this week

Apple and Microsoft went head-to-head this week, and we tried to make sense of...

WHO Guidelines for establishing a poison centre