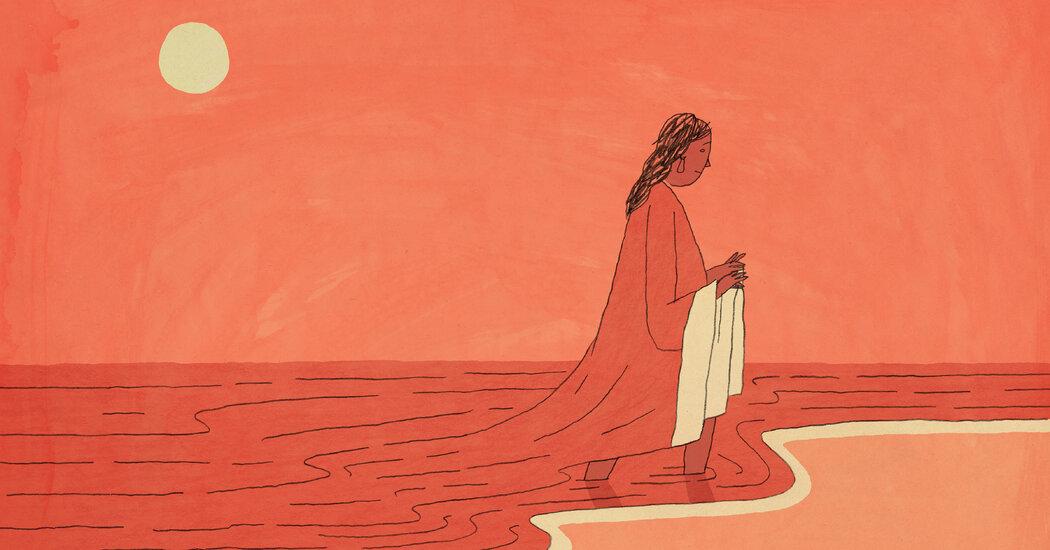 “Can I get you two something cold to drink?” the poolside waiter said, holding a check over his brow to block the sun on that hot day. Wearing only short shorts, he couldn’t have presented a stronger contrast to the woman he was addressing; my mother was in a body-length, long-sleeved linen gown.

“Same,” I said. My mother knew I drank alcohol, but she didn’t like it when I drank in her presence.

We were in Naples, Fla., on our family’s annual spring break vacation, a tradition we had continued even as my brother and I entered midlife.

At this point, the vacation routines were well honed. My father rose early and walked to the pier, where he rented a pole and fished; my mother rose later, and, after breakfast, planted herself by the pool to read. I split my time between them, spending the earlier part of the morning with him and the few hours before lunch with her.

She was reading “The Bluest Eye,” but as we sat in side-by-side chaise longues, she kept the book closed. I sensed her stewing and wondered what was bothering her.

All at once she turned to me brightly: “Should we go for a walk along the water?”

On the beach, my mother was the only person fully covered, neck to foot. In all my years as her son, I had never seen her legs above the tops of her ankles, and certainly never seen her in anything remotely like a swimsuit — though she’d worn one as a child, having learned (and loved) to swim. Whenever we walked along the water, she would roll up her pants or gather the front of her gown so she could feel the surf wash up over her feet.

[Sign up for Love Letter, our weekly email about Modern Love, weddings and relationships.]

I had often wondered if she missed being in the water, but I’d never thought to ask. I knew the choice was her own; my father was neither a practicing nor believing Muslim, and he wouldn’t have cared if she’d wanted to show some skin.

At 67, she was still beautiful, though less concerned with appearing so. My parents had met in Pakistan in the early ’60s, both ridiculously attractive, if the tales their friends told and the pictures taken of them at the time could be trusted. My mother’s parents had fielded two dozen proposals for her before she ended up surprising her family by falling in love with a fellow medical student in Lahore.

My father’s parents weren’t any happier about the match. Having already announced their decision to arrange their only son’s marriage — and selected a prospective bride — my paternal grandparents didn’t even bother to show up to the wedding.

Though theirs had been a “love” match, my parents’ marriage was rocky from the start. My father had a wandering eye and didn’t seem to feel that being married should stop him from acting on it. By the time I was 4, I already knew my father had “other women,” as my mother used to call them. An unhealthy proximity to this — their toxic central conflict — had defined much of my childhood. It had defined the narrative of their marriage. Or so I thought.

As she and I walked along the shore, her slippers in one hand, the front of her gown bunched up in the other, she started to tell me a story. In the mid-80s, when I was not yet in high school, she had worked for a time at the Medical College of Wisconsin. An early specialist in nuclear imaging, she was in unusually high demand then, driving all over Milwaukee to read scans at various hospitals.

Although her time covering shifts at the medical college had been short — barely two years — I had long known she was particularly fond of the place.

I had always assumed her affection had something to with the institution’s prestige, the allure of research, a reminder of the pedagogical atmosphere of her own beloved years of medical school in Lahore. It may have been all that, too, but primarily, I would discover, it was about a man, a surgeon there.

Like her, he was married with two children. They met one night when he was on call and she was at the hospital late, reading a scan for a patient on whom he was to operate. Tall, with dusty blond hair and the build of an athlete, he had played football in college but didn’t carry himself with the swagger and self-regard one tended to find, she said, in surgeons, especially those who had been athletes.

My father was not a diminutive man, either, but as a star cardiologist he did carry himself with a swagger that could be off-putting.

“He was humble,” she said now, speaking of the surgeon, as she watched the water moisten her feet, an insinuation of a smile on her lips. “That humility is what drew me to him.”

I was glad she wasn’t looking at me as she spoke. I had never imagined my mother desiring my father, let alone another man. As startled as I was, I didn’t want her to stop.

There was something about her face I didn’t recognize, a quiet fierceness. She looked away. Up ahead, I thought I spied my father’s silhouette on the horizon. It was about that time of morning when he started to make his way back to the hotel.

My heart started to race.

“He wasn’t happy with his wife,” she said. “I wasn’t happy with my husband. But nothing happened. We each had two kids. We were from different cultures. What was the point of putting everyone through all that pain? Just so we could be happy? I know that’s what a lot of people in this country think it means to be free. But that’s not the kind of person I am.”

I knew this last idea, about freedom, was a rejoinder addressed to me about my father. I knew she felt this way about him, though I had come to wonder if it was a fair assessment. After all, he hadn’t left his family either.

The man ahead, I could see now, was indeed my father, trundling toward us with a red fish dangling from his hand. My mother still hadn’t noticed him.

“I think that’s Dad up ahead,” I said quietly.

She looked up. “Speak of the devil.”

“Caught us some lunch,” my father said as he approached, holding up the fish. “Snapper. Going to take it to the kitchen to see what they can do.”

“I just had breakfast,” she replied.

“How about you?” he said, turning to me. If her dismissal bothered him, I couldn’t tell. Their long, internecine strife — waged in withering looks and muttered replies — suddenly appeared less dramatic. Maybe it was just how they got through their decision to stay together.

Once he was gone, my mother and I continued in silence. The atmosphere of complicity was gone; her confession was over. She dropped her gown as she headed for higher ground. I followed her to the top of a large dune.

“Did you stay in touch with him?” I said as I joined her.

She shook her head. “He moved away. We had a few letters. But that was it.” She looked out at the ocean. After an awkward silence, she said, “I thought you should know.”

For a moment, I saw the younger, arresting woman I’d known as a child. I was finally seeing through the role she had played her whole life, that of my mother, a role I believed she had loved, and which had come define her in so many ways, but not entirely.

Our eyes met now, and her tentative, vulnerable expression surprised me. I fought the urge to look away and spare us a discomfort I assumed we were both feeling. Something new was happening between us. I didn’t want to revert to being the son who only saw a mother he loved and needed, but who he assumed, perhaps like all children, ultimately belonged to him. I held her gaze. “I’m glad you told me,” I said.

She smiled. We lingered on the dune a little longer, and then she gathered up her robe and we headed back down to the water.

Meghan Markle to Oprah: ‘There’s a lot that’s been lost’ in relationship with royal family

Our masjid will be modern: Ayodhya architect