BROOKLYN CENTER, Minnesota — In 2015, it was Jamar Clark. A year later, Philando Castile. In 2020, George Floyd. And on Sunday, Daunte Wright. Over and over again, Minneapolis residents have had to relive the trauma of watching a police officer kill a Black man — and they’re exhausted.

At a memorial event at the site of Wright’s death on Tuesday, one woman said she felt like she was experiencing déjà vu.

“It’s almost May, and we’re doing exactly what we were doing last May,” she said, referring to Floyd’s death in May 2020.

Yet, in the face of immense hurt, residents also described trying to learn not just from last year but from decades of killings by police and centuries of anti-Black racism. They want to build on their activism, provide more aid for the community, and ultimately try to heal.

“My trust is not in this system no more; my trust is in you,” one man said at Wright’s memorial event. “I’ll be damned if we go another 400 years letting history repeat itself.”

The heart of the Minneapolis area is one with multiple nodes, from the George Floyd memorial site to community center parking lots and high schools, where dozens of people are distributing food to those in need. It also includes the people who are organizing for change and trying to heal.

Leslie Redmond, president of the NAACP’s Minneapolis branch, has been trying to help the community through a healing-focused approach. In February, she formed the Community Healing Team, which brings together locals — including a therapist, professor, comedian, rapper, and religious leaders.

The group came together just before the trial began for Derek Chauvin, the former Minneapolis police officer who killed Floyd by pressing a knee into his neck for more than 9 minutes. Redmond said the goal was initially to help people process the trial, but the scope of the project changed after Wright’s death.

“Now we’re having to help them survive another murder,” Redmond told BuzzFeed News. “And so we continue to throw salt on open wounds, but our work doesn’t stop.”

On Tuesday afternoon, the Community Healing Team came to Wright’s memorial site and led a crowd through prayers and breathing exercises. A microphone was passed around to those who wanted to say a few words.

Redmond said it’s important to incorporate healing into activism, especially when planning for the long term. She said there are “deep wounds” in the community, which is still recovering from the police killings of Clark, Castile, and Floyd.

People in and around the city have their own ways of channeling their grief. On Wednesday afternoon, a 27-year-old Minneapolis resident named José came to Wright’s memorial site and burned a bundle of sage.

“I lit it around his little memorial and over where his spirit lay so he can feel like it’s OK to leave, because I know he’s trapped here and he’s scared,” he said. “So I feel like that sage would be good just to tell him that it’s OK to go. It’s fine. We’ll take care of you here.”

Meanwhile, other community efforts are unfolding in Minneapolis.

Josh Fraser, principal of Brooklyn Center Community Schools, has spent the past several days working with dozens of school staffers, students, activists, and community members to gather food, toiletries, and household supplies for people in need to distribute at a community recreation center.

“I got little left in the tank,” he said Wednesday morning. “Mentally, I’m not at my best, but I’m just trying to move around physically because that’s what I can give right now.”

Shortly after Wright’s death, Fraser said, activists from Minneapolis gave advice on how to get in touch with businesses and groups that could provide food, refrigerators, tables, chairs, and anything else they might need to distribute supplies to people in need. He said that, unfortunately, the back-to-back tragedies of Floyd’s and Wright’s deaths have forged these connections between school leaders and activists.

“There [were] so many lessons to learn about how to interconnect people and connect the dots,” he said. “And they’ve just really helped us with that because that’s not something we’ve done before [on] this large of a scale. This murder, this tragedy, has taught us how to be an even better community school. Unfortunately, this was something that did that for us.”

Inside the high school, about a dozen students were gathered in the cafeteria painting protest signs. Some were meant for the streets, but most were for school grounds on Thursday, when students will come to protest in a safe environment.

The events were planned by the school’s Youth Participatory Action Research club, which is focused on volunteer work and social justice issues. One of the members, 17-year-old Nayeli Williams, told BuzzFeed News that it’s been heartening to see support from the teachers and donations from the community.

“When people are volunteering their time to make signs for a protest that they may not relate to directly because they’re not Black, they’re not young, it shows how selfless people can be in the community and how much they’re willing to help people that they care about,” she said.

Sheridan Zeck, 17, and Kai Johnson, 15, noted that many students live at an apartment complex adjacent to the police station and the high school. Sheridan said it breaks her heart that, because of police, people have not felt safe in their homes.

“People have had to evacuate,” she said. “There’s families in there that are getting teargassed. They can’t sleep at night. They can’t breathe.”

Kai said it was important to create a safe place for students to demonstrate since police have used tear gas on protesters in the city. Authorities again used pepper spray, rubber bullets, and other repellents against demonstrators who refused to disperse outside the heavily fortified police station Wednesday night.

“This was a really great way to be able to channel all our emotions about what’s happening into a project and to be able to support protesters and be able to protest ourselves,” Kai said.

Redmond said it’s important to have protests where people can yell and shout in addition to healing gatherings, which often have a different energy. For her, the site of Wright’s death was the appropriate place for the Community Healing Team to go.

“Somebody asked me, ‘Why don’t you do the healing gathering at the police station?’ And I didn’t think that that was appropriate,” Redmond said. “That was a place to protest, for people to yell, shout, and do whatever they needed to — which could also be healing. I don’t want to act like it can’t be. But I think it is a very different energy when you have police presence, when you have military presence.”

After passing around the microphone to several members of the Community Healing Team at the Wright memorial site, Redmond encouraged attendees to share what was on their mind.

One 26-year-old man started talking about his experiences with racial profiling and harassment in public spaces by his own neighbors. As he spoke, he became deeply upset.

At one point, Redmond interrupted and embraced him. After a few moments, the man started to sob. Two other people joined the embrace.

“You can hear it in his voice — he’s hurting,” said one member of the healing team after taking the microphone. “He loves this city. He loves this community.”

At another point, a man took the microphone and led the crowd through a calming breathing exercise. As he concluded, the sun peeked through the overcast sky, and a soft glow shone over the crowd. The man smiled as he noticed.

“Thank you, universe,” he said. “Thank yourselves.” 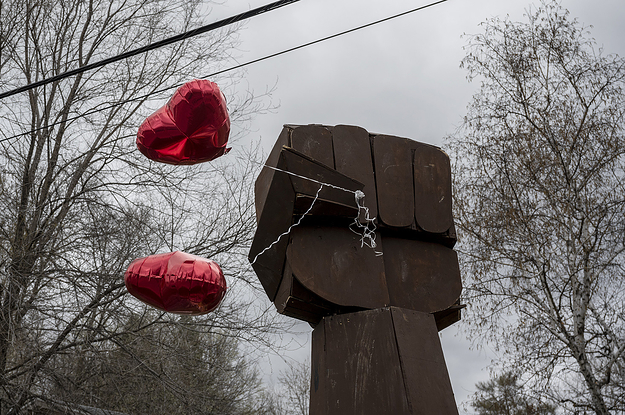 Biden says corporate tax rate should be between 25% and 28%

‘She wanted me’: How Amanda chased Sam

Easy trick for women to get what they wantJana accidentally hears her neighbours every Sunday morning.

‘She wanted me’: How Amanda Brown made Sam Newman hersHe will never stop loving her.

Be Honest — If These Celebs Were Your Parents, Would You Use Them For...

Biden says corporate tax rate should be between 25% and 28%