Police had no legal reason to stop Elijah McClain, a new independent review has found, the first in a series of unjustified and violent actions taken by officers that led to the 23-year-old Black man being placed in a chokehold and injected with ketamine before he died.

The investigative report, released on Monday after millions of people called for justice for McClain, also laid out concerns about the Aurora, Colorado, police department’s own investigation of the officers’ use of force, alleging police investigators failed to ask “basic, critical questions” and “failed to present a neutral, objective version of the facts and seemingly ignored contrary evidence.” Though McClain died in August 2019, an independent investigation didn’t begin until Black Lives Matter protests took place around the country in the summer of 2020.

The new report, commissioned by Aurora’s city council, also found officers had no legal reason to frisk or put McClain in the controversial chokehold, pointing out that none of the officers involved suspected McClain of a specific crime at any point before he was wrestled to the ground.

Shortly after the report was released Monday, Sheneen McClain, Elijah McClain’s mother, said in a statement the review showed that instead of conducting a detailed investigation of her son’s death, the city had “engaged in a sham investigation in order to exonerate its employees and hide their wrongdoing.”

“The independent investigation that was commissioned and paid for by Aurora makes clear what was already known: Elijah should never have been stopped by the police, never had been arrested, never have been subjected to extreme force by the police and should never have been forcibly injected with ketamine by Aurora Fire Rescue Paramedics,” the statement read. “Notably, this report — with its start and unequivocal indictment of Aurora officials’ conduct — is not based on new, revelatory evidence. It is based on evidence that Aurora has had in its possession all along.”

According to the report, the first officer who contacted McClain, Officer Nathan Woodyard, put his hands on McClain within 10 seconds of first approaching him, even though there were no visible weapons and McClain had made no threatening gestures toward him.

“Woodyard’s decision to turn what may have been a consensual encounter with Mr. McClain into an investigatory stop — in fewer than ten seconds — did not appear to be supported by any officer’s reasonable suspicion that Mr. McClain was engaged in criminal activity,” according to the report. “This decision had ramifications for the rest of the encounter.”

After the violent stop, during which McClain struggled to breathe, he was injected with a powerful dose of the sedative and taken to a hospital. He died there three days later.

A spokesperson for a local Black Lives Matter group said the new report confirmed that McClain should never have been confronted by police in the first place.

“Results from the independent investigation in the murder of Elijah further supports what his family and community already knew,” said Apryl Alexander, a community organizer and spokesperson for BLM 5280. “He was a young man trying to walk home and confronted without cause. Instead of simply talking to Elijah, physical force was used within 10 seconds—not enough time for him to even explain that he was going home. Criminalizing Black people for living their lives needs to end.”

McClain’s death sparked large protests in the streets of Colorado, and more than 5 million have signed onto a Change.org petition demanding the officers involved in the deadly stop be held accountable.

According to authorities, McClain was originally stopped after police received a 911 call from someone who said they saw someone wearing a ski mask and “acting weird” and “waving his arms around.”

Family members of McClain have said he wore a ski mask to stay warm because he had anemia.

Audio from body camera footage revealed McClain asked officers to let him go. And according to the report released Monday, although officers needed to have “reasonable, objective” and “articulable” suspicion to make the stop, none of them offered one during subsequent interviews.

“None of the officers articulated a crime that they thought Mr. McClain had committed, was committing, or was about to commit,” according to the report.

Instead, the officers said in interviews that McClain was acting “suspicious,” pointing to the ski mask and waving of his arms in an area they described as having a “high crime rate.”

One officer, the report said, claimed that McClain’s refusal to stop was in itself suspicious because it “was consistent with someone who ‘either just committed a crime’ or someone who is ‘concealing something whether it be a weapon or drugs.”

But that’s not a legal reason for police to detain a person, the report noted.

The panel also wrote they were unable to find sufficient evidence that officers had a legal justification for frisking McClain, pointing out that one of the officers reported he “felt safe making an approach,” and there was no suggestion McClain had a weapon.

Instead, officers forced McClain to the ground, and one reported that McClain had attempted to grab an officer’s gun. Officers used a carotid hold to restrain McClain just before he passed out.

The report also noted that, in their description of their encounter with McClain, police described the 23-year-old as “struggling” and said he had “incredible strength” or “crazy strength.”

“It is not clear from the record whether Mr. McClain’s movements, interpreted by the officers as resisting, were attempts to escape or simply an effort, voluntary or involuntary, to avoid the painful force being applied on him, to improve his breathing, or to accommodate his vomiting,” the report stated.

Audio of the encounter instead recorded McClain “crying out in pain, apologizing, vomiting, and at times sounding incoherent.”

“His words were apologetic and confused, not angry or threatening,” the report said. “He became increasingly plaintive and desperate as he struggled to breathe. He told officers he had his ID, that his name was Elijah McClain, and that ‘I was just going home.'”

One of the officers called dispatch saying McClain was “still fighting,” but audio at the time of that transmission shows McClain telling the officers, “forgive me” and “you are all phenomenal, you are beautiful. Forgive me.” 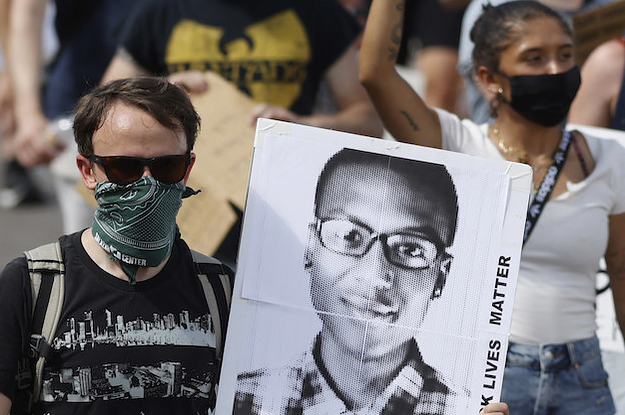 53 Cleaning Basics You Should Probably Know By Now

Why man showed bum in court

Big switch pays off as Demons regain sparkCourtney Hodder missed out on a chance at a goal of the year contender. Picture: Getty Images

Woolies warns of ‘volatile’ changeAvocados are due to drop in price which is good news for brunch lovers.

Isabelle Huppert on the Transformational Power of Shoes