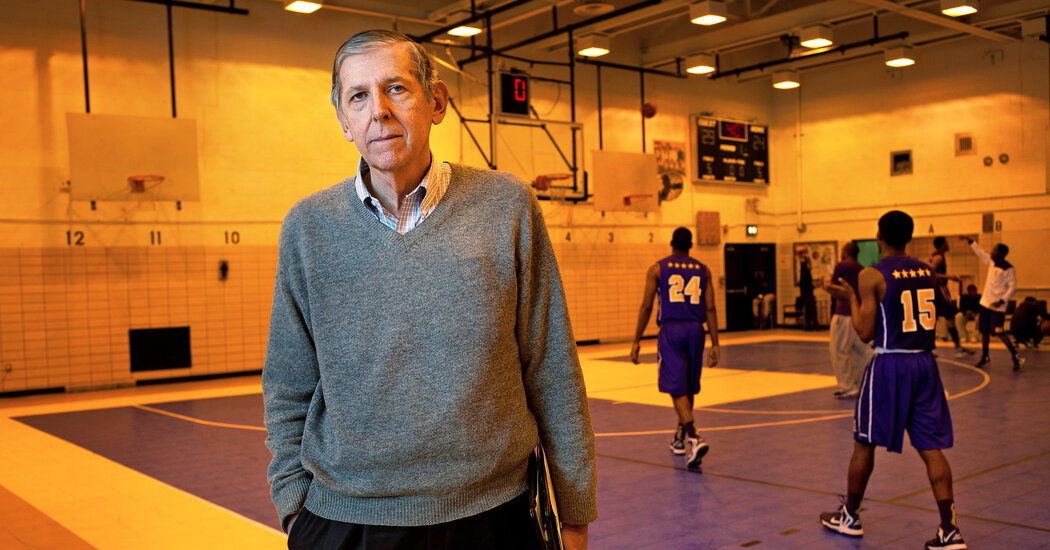 For more than 40 years, Tom Konchalski was a fixture in gyms, summer camps and tournaments from Maine to West Virginia; a soft-spoken high school basketball scout whose newsletter was required reading for college coaches craving insights about potential recruits.

He showed early prescience about future N.B.A. players like Kyrie Irving, Bernard King and Kenny Anderson, but his focus was primarily on creating opportunities for high school players at all levels of college basketball, whether at Division I, II or III schools, or in Canada. A devout Roman Catholic, he thought of players as his ministry.

“You’d read his report, mark down names you wanted to investigate and you took what he said as gospel,” said Dave Odom, a former coach at Wake Forest University and the University of South Carolina, where he recruited a guard, Tre Kelley, whom he learned about from Mr. Konchalski’s newsletter. “Tom saw the kid in a summer league, and I followed up with him.”

Mr. Konchalski, who retired last year from publishing the newsletter High School Basketball Illustrated, died on Feb. 8 in hospice care in the Bronx. He was 74.

The cause was prostate cancer, said his brother, Steve, who is retiring after 46 seasons as the men’s basketball coach at St. Francis Xavier University in Antigonish, Nova Scotia. The current season was canceled because of the coronavirus pandemic.

For his newsletter, Mr. Konchalski assessed players in 13 categories and offered colorful accompanying comments about them like “loaded with offensive chutzpah” and “scores like we breathe!”

“He had a genuine interest in getting his evaluations right,” said Bob Hurley Sr., who was the basketball coach at St. Anthony High School in Jersey City, N.J., for 45 years until the school closed in 2017. “He would never rush. If someone had a bad game, he promised to come back.”

Mr. Konchalski’s long career made him the subject of a short ESPN documentary in 2013 and earned him a nomination in December from the Naismith Memorial Basketball Hall of Fame in the contributor category. Honorees will be announced in April.

Thomas Coman Konchalski was born on Jan. 8, 1947, in Manhattan and grew up in the Elmhurst neighborhood in Queens. His father, Stephen, was a general foreman with the New York City Department of Parks and a semipro baseball player. His mother, Marjorie (Coman) Konchalski, was a homemaker who later worked as a department store cashier.

Tom was 8 when he and his brother, who is two years older, went with their father to an N.B.A. doubleheader at Madison Square Garden. Eventually, the brothers took the subway on their own to see games at the Garden and at schoolyards around the city.

In 1959, Mr. Konchalski first saw Connie Hawkins, the exhilarating star of Boys High School in Brooklyn during a summer league game. It was an epiphany for the 14-year-old.

“I would follow him from playground to playground,” Mr. Konchalski told The New York Times in 2013. “His game was electric. With one hand, he could palm a rebound out of the air.”

At Archbishop Molloy High School in the Briarwood section of Queens, where his brother played guard on its basketball team, Mr. Konchalski covered the team for the school newspaper and learned the intricacies of basketball from Jack Curran, Molloy’s coach from 1958 to 2013.

“Tom never really played,” Steve Konchalski said in a phone interview. “He’d go to the park and put up some shots, and he had a nice shooting touch. But it wasn’t his thing to compete. He got the height. I’m 6-2. He’s 6-6.”

After graduating from Fordham University in 1968 with a bachelor’s degree in philosophy, Mr. Konchalski taught math and social studies at a Roman Catholic school in Queens (and for a time pursued another sports interest, as a linesman at the U.S. Open tennis championships, and its predecessor, when they were played at the West Side Tennis Club in Forest Hills).

Mr. Konchalski’s path to scouting was accelerated by coaching Catholic Youth Organization basketball teams in New York City. His expanding knowledge of local players led him to part-time scouting in the 1970s for Howard Garfinkel, the influential founder of High School Basketball Illustrated and a co-founder of the Five-Star Basketball Camp, a celebrated youth instructional showcase for future superstars who included Michael Jordan and LeBron James.

Mr. Konchalski left teaching to to work full-time for Mr. Garfinkel in 1979 and five years later, he bought H.S.B.I. In 1980, Mr. Konchalski famously helped get Jordan — then known as Mike Jordan — into the Five-Star camp at the request of Roy Williams, an assistant coach at the University of North Carolina, which was recruiting Jordan (and which he would attend) and wanted to see him play against high-octane competition.

Not yet well-known, Jordan stunned the camp with his play.

“In tryouts when people were guarding him, they were guarding his belly button,” Mr. Konchalski recalled last year in an interview with Forbes magazine. “He had a great stop/ jump. He’d stop on a dime and really elevate. He was an extraterrestrial athlete.”

And Mr. Konchalski — who was known for his detailed recall of games and players from decades earlier — was something of a Luddite.

He did not own a computer, a cellphone or an answering machine. Working from his apartment in Forest Hills, Queens, he typed each of the 16 annual issues of the newsletter, stapled them and mailed them in manila envelopes to about 200 coaches who subscribed for several hundred dollars a year. He did not post his publication online.

“I have an electric typewriter,” he told The Daily News of New York in 1990. “That’s my concession to the ages. I always say I was born seven centuries too late.”

He did not drive, so he commuted to and from games by train or bus, and was nicknamed the Glider, for the way he quietly slipped into a gym, settled onto the top level of the stands and started taking notes on players on a legal pad.

In addition to his brother, Mr. Konchalski is survived by a sister, Judy Ball.

In 1976, Mr. Konchalski saw that Chris Sellitri, a 6-foot-5 forward at Bishop Loughlin Memorial High School in Brooklyn had no scholarship offers from colleges in the United States.

“Today, a player who made All-Brooklyn would get a scholarship,” Steve Konchalski said. “But back then, some outstanding players fell through the cracks. So Tom directed me to Chris and he became the leading rebounder in the history of our school.”

He added: “He wouldn’t tell a kid, ‘Go to my brother’s school,’ but he’d say to me, ‘This kid is still available — here’s his coach’s name and my evaluation.’”

C. Vivian Stringer Is the Thread Between the W.N.B.A.’s Emerging Stars

Woman pinned against wall after crash

Teenagers will grow up to question exposure to ‘wild and dangerous’ social media, says...

Kaley Cuoco’s Husband Surprised Her For The Golden Globes, And It...