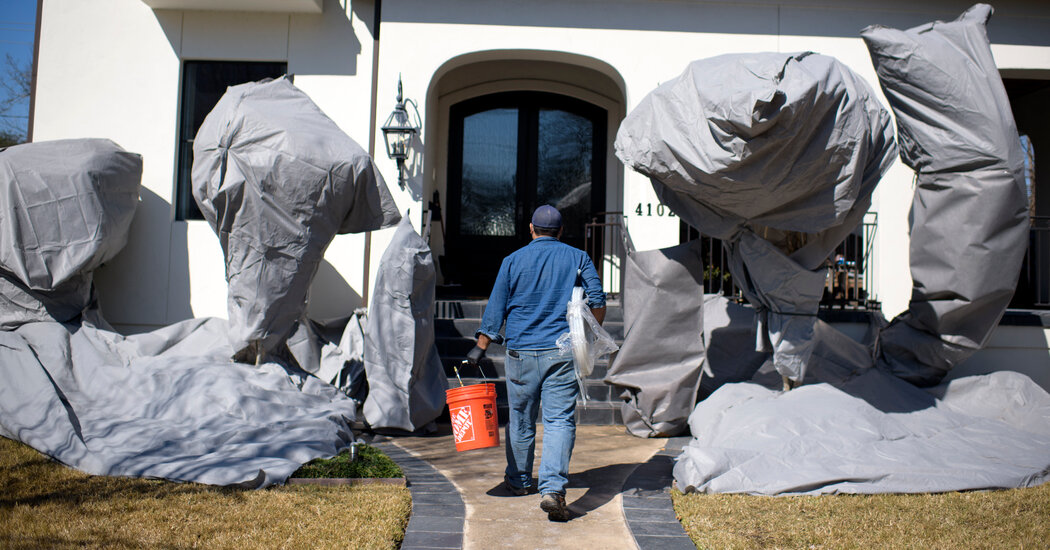 HOUSTON — Randy Calazans is one of the hottest commodities in Texas right now. He’s a plumber.

The winter weather nightmare that swept through the state last week cut off power and heat to millions of homes that were never designed for frigid temperatures. Up and down the state, people were driven from their homes, or came back to find them badly damaged, by pipes and valves and tanks that froze and burst.

So when the snow started to defrost and the sun made a coveted return, plumbers were suddenly like roofers after a hurricane: Everybody seemed to need one, all at once.

At One Call Plumbing, the plumbing business where Mr. Calazans works, employees have been answering the phones nonstop in a small office with sprawling maps of Houston on the walls. The owner, Edgar Connery, said he had been in the business for nearly 40 years and had never seen a crush like this after other natural disasters. Some other companies had gotten so swamped that they stopped answering the phone at all.

Mr. Calazans returned to work in the field on Thursday, going from one customer’s house to another, mainly to size up the damage. Simple problems he repairs on the spot if he can. But some houses will need major work, and may even have to be re-piped completely; those must be left for the weeks ahead.

Obtaining the materials to get even the simple jobs done is a growing problem, Mr. Calazans said: Waiting in line at a supply house could tie him up for hours, but when he tried picking up a few things at Home Depot, the shelves were bare.

With power largely restored and temperatures back to the more seasonable 60s and 70s, Texans continued to grapple on Sunday with the state’s continuing water crisis. Some reservoirs in the state were refilling again after nearly being drained by all of the burst water mains, leaking pipes, and faucets that were left running to keep from freezing.

Austin was still under a boil-water notice as pressure gradually built back up toward normal in its water system, which was knocked out by the power failures. Austin Water said in a statement on Sunday that once pressure was restored, the water would have to be tested before being deemed safe to drink, which can take several days.

Houston had restored pressure to its system by Sunday morning, and lifted its boil-water notice in the afternoon.

The full magnitude of the damage left behind by the cold snap is still emerging, but the state already knows it needs more plumbers in a hurry. Gov. Greg Abbott’s office has said that the state will grant provisional licenses to out-of-state plumbers and will waive fees and certain other requirements for plumbers with lapsed licenses who want to renew them.

Mr. Calazans, 35, stressed the importance of having repair work handled by a qualified professional, even in the aftermath of a disaster. He recalled with disgust some of the dodgy, off-the-books work he had come across over the years.

“You don’t just want anybody doing plumbing,” he said.

He has more experience with hard winter weather than many Texans. He and his wife moved to the Houston area last June from Long Island, seeking greater opportunity than they saw in the locked-down New York suburbs.

But Mr. Calazans did not escape damage of his own in Texas: A water line broke in his garage, he said, pretty much flooding the space and damaging his gym equipment.

When he got to Jared Coyle’s house in the Cinco Ranch area of Houston around noon on Friday, debris and insulation sat in a compact pile by the garage. Pipes had burst in the house, damaging several areas, including his daughter’s room and the laundry room.

For Mr. Coyle, Mr. Calazans represented salvation. The plumber, who had first visited the house on Thursday, was returning with more supplies in hand to complete the repair.

“These homes are not built for the cold down here, and things were not prepared for the extreme cold,” said Mr. Coyle, who moved to Houston about 17 years ago. “There’s only so much you can do before you just say, ‘It is what it is, we’ll just deal with what happens and we’ll move forward.’ That’s all you can do.”

After major storm systems hit Texas, most of the damage is usually concentrated in urban areas like Houston and Dallas, according to Chris Pilcic, a spokesman for State Farm Insurance based in Texas. But this time, he said, it’s everywhere.

As of Friday, State Farm had received about 18,900 property claims from customers in Texas, most of them related to frozen and broken water pipes, he said.

“With this, we’re hearing from customers across the state,” Mr. Pilcic said. “There isn’t one area that hasn’t been affected.”

And it’s not just Texas: More than 2,100 claims had come in from Louisiana, he said, and hundreds more from other states in the path of the storm like Oklahoma, Arkansas, Mississippi and Tennessee.

Lisa Gochman, another Houston resident on Mr. Calazans’ list for Friday, said the portable electric lanterns she bought for hurricane season came in handy when the power went out last week in her two-bedroom condo — that is, until a water leak collapsed part of the ceiling in her guest room, leaving the bed completely covered in rubble.

Leaks also appeared in her bathroom and kitchen, she said, and the condo had neither power nor water. So she resorted to couch-surfing for shelter, hoping to eventually move to a hotel or a short-term rental.

“I’m trying to just kind of go with it,” said Ms. Gochman, who has lived in the condo for close to 11 years. “I’ve cried a couple times.”

Before reaching One Call Plumbing, she said, the earliest availability she could find online for a plumber to come was April 22.

After climbing through Ms. Gochman’s closet to look into the attic, Mr. Calazans said it was possible that there were even more leaks, but he would not be able to tell until her water was turned back on. It night be necessary to re-pipe the whole place, he said, at a cost of about $10,000.

Ms. Gochman said she was expecting a figure like that, but was not sure how much her insurance would cover.

Mr. Calazans said it was not unusual to arrive at a job expecting to tackle a minor problem, only to discover that much more was wrong. That’s what happened at one house in the Bellaire section on Friday afternoon: One burst pipe revealed another, and then more leaks in a pipe encased in a stucco column. He couldn’t get all of that done in the one visit, after all; he would have to come back another day.

“It’s the nature of the business,” he said.

Cat missing for over 4 years reunited with owner

Traveling to Disney Parks during Covid-19: What you need to know before you go

Get a Hippie, Etsy Look This Fall, With Quilt Coats